Introducing the EC site rankings in Japan and around the world!

If you are a company developing an EC business or are planning to start an online store, please take a look at this page until the end.

How is the EC Market Size and EC Conversion Rate Changing? 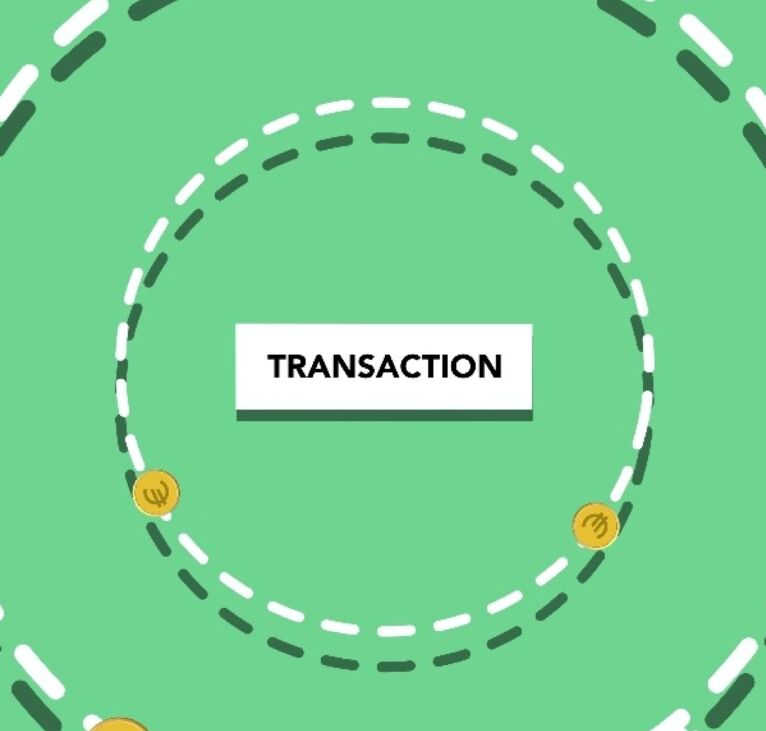 There is an image that online shopping demand is steadily increasing, such as EC malls such as Amazon and Rakuten Ichiba, and mail-order sites that sell directly from manufacturers and brands.

Do you know the actual size of the EC market and what percentage of each sector is accounted for by EC sales?

The following explanation is based on data from the “Market Survey on Electronic Commerce” report compiled by the Ministry of Economy, Trade, and Industry (METI).

First, let’s look at the size of the latest BtoC market and the EC conversion rate.

We can see that the market has been expanding steadily since 2010. But what about the EC conversion rate?

The latest data is showing 6.76%. So while the BtoC-EC market in Japan is still small, there is still room for growth.

Now let’s look at the BtoC-EC market further by field. 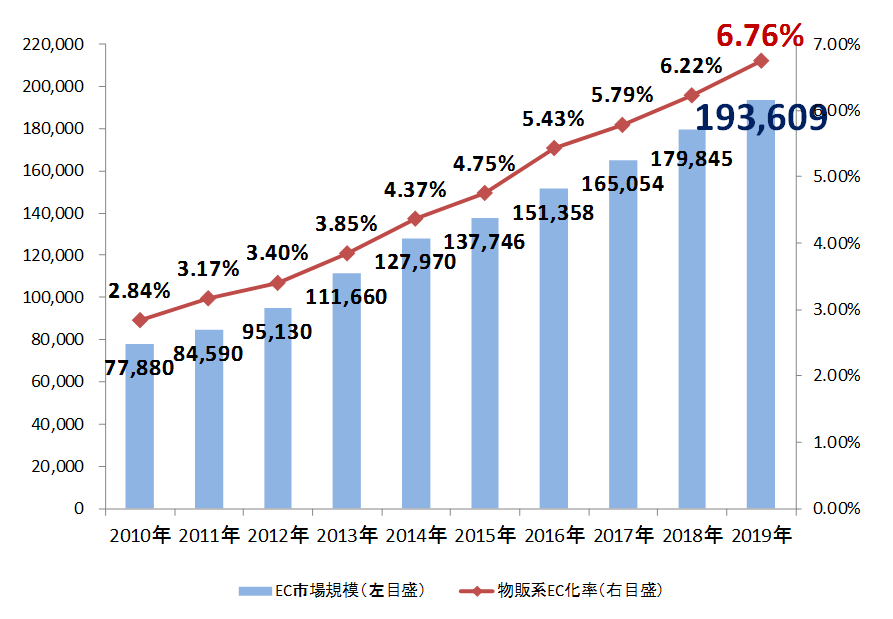 Based on the data, the EC market in the product sales field is the largest.

However, although the market size is not as large as the above three sectors, the most advanced sector in terms of the EC rate is “office supplies and stationery,” at 41.75%.

It is also important to note thatCtoC-EC is expanding as a recent trend in the EC market. These include person-to-person transactions such as Mercari and Rakuma. 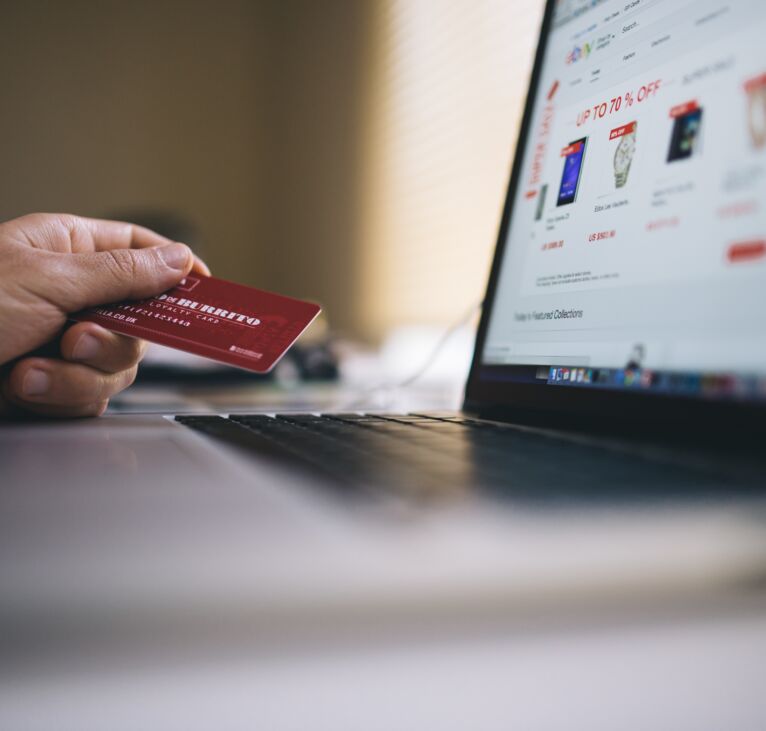 When shopping online, many people use e-commerce malls where they can search for products from multiple shops and brands at once.

First at the top of the list is Rakuten Ichiba, the pioneer of e-commerce sales in Japan. 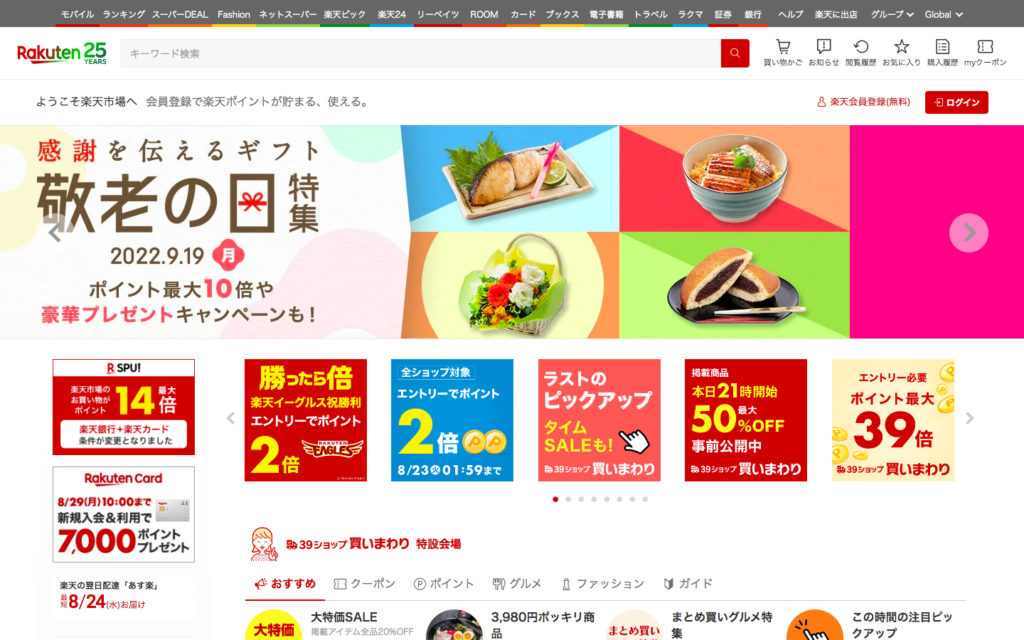 The key feature of Rakuten Ichiba is the linkage of the group’s services, such as Rakuten Card, Rakuten Travel, and Rakuten Mobile. The combination of these services, which are offered in a variety of fields, has enabled Rakuten Ichiba to successfully retain its customers as Rakuten users in a comprehensive manner.

In particular, Rakuten Points, which can be accumulated through the use of each service, are key. Of course, a high percentage of the points can be redeemed for purchases on Rakuten Ichiba, and the accumulated points can be used to purchase products.

Another feature at Rakuten Ichiba is the introduction of the free shipping line, which offers free shipping for purchases of 3,980 yen. This was a measure to improve usability and attract more customers, but it was controversial because of the backlash from some of the stores that opened.

In addition, Rakuten Ichiba also includes the total distribution amount of flea market apps and Rakuma, which are linked services. Therefore, if you compare only the sales at the mall, it is thought that Amazon Japan will be better off.

Next in second place was Amazon, which has a large market share around the world. Unlike Rakuten Ichiba, it is a marketplace-type e-commerce mall where each company and brand sells one item at a time. 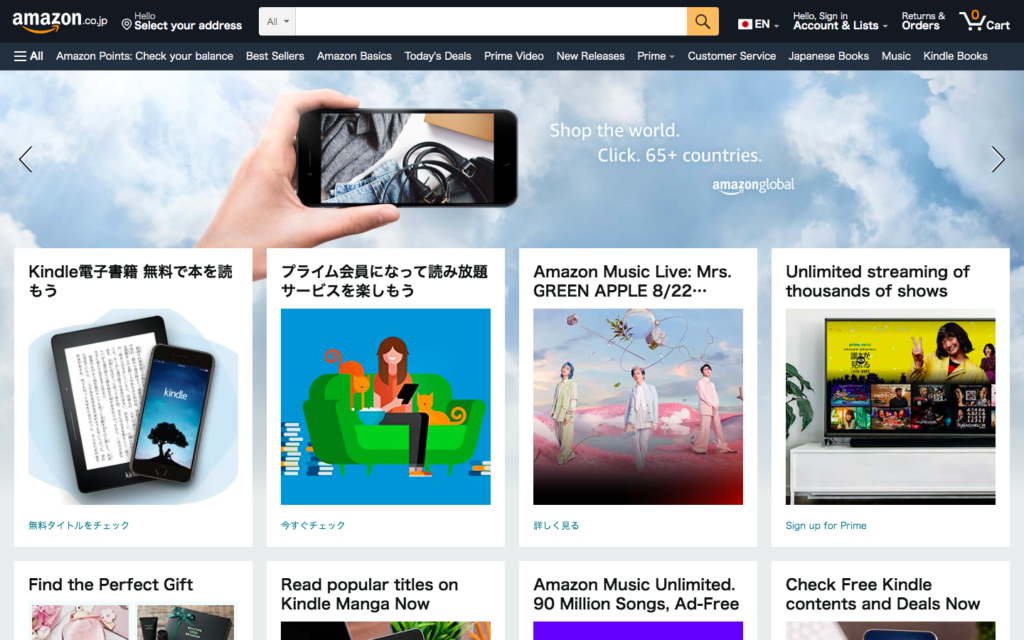 Amazon is expanding its influence to the real world, such as opening Amazon GO, an unmanned cash register in the United States. Further progress can be expected in Japan in the future as well. 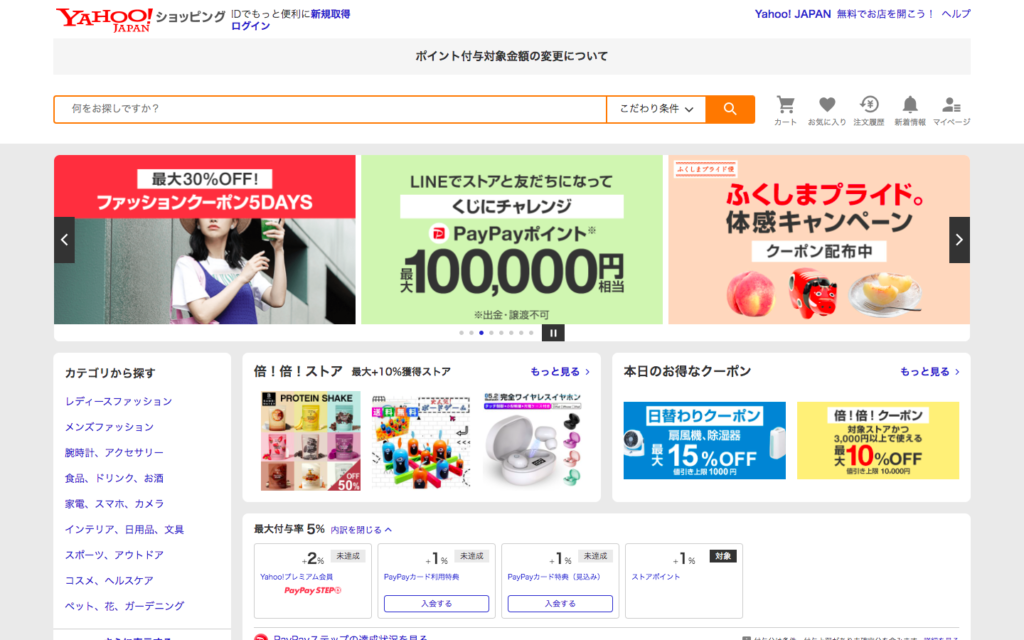 In Japan, Rakuten, Amazon, and Yahoo! are often said to be the top three retailers, but Yahoo! Japan wants to overcome the top two retailers but is having a hard time catching up. That’s why Yahoo! Japan acquired ZOZO, the operator of ZOZO Town, a fashion e-commerce store.

In addition, ZOZO is aiming to retain users by linking up with PayPay, a cashless payment system, and allowing users to earn points. 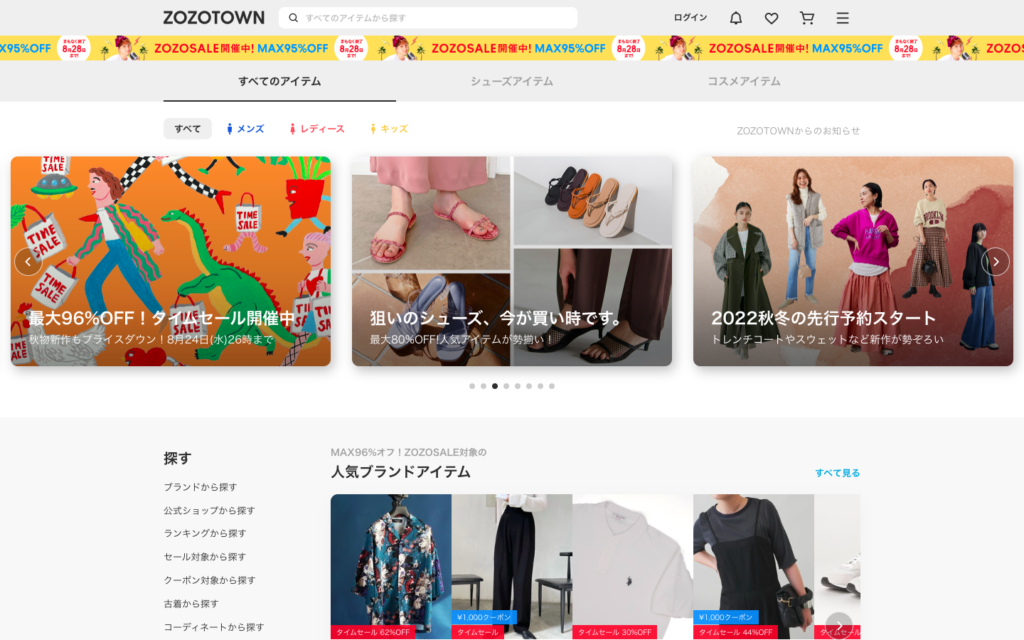 In 4th place, ZOZOTOWN is an e-commerce mall specializing in apparel. Although its distribution value is lower than the top three sites, it is quite impressive that it has made it to this ranking as a stand-alone fashion e-commerce mall, because those sites were general e-commerce malls.

As mentioned above, ZOZO was acquired by Yahoo! In this vein, ZOZOTOWN will open a store in the PayPay mall opened for Yahoo! and Softbank users in the fall of 2019.

This was ZOZOTOWN’s first store opening in an external mall, and this series of moves garnered a great deal of attention. 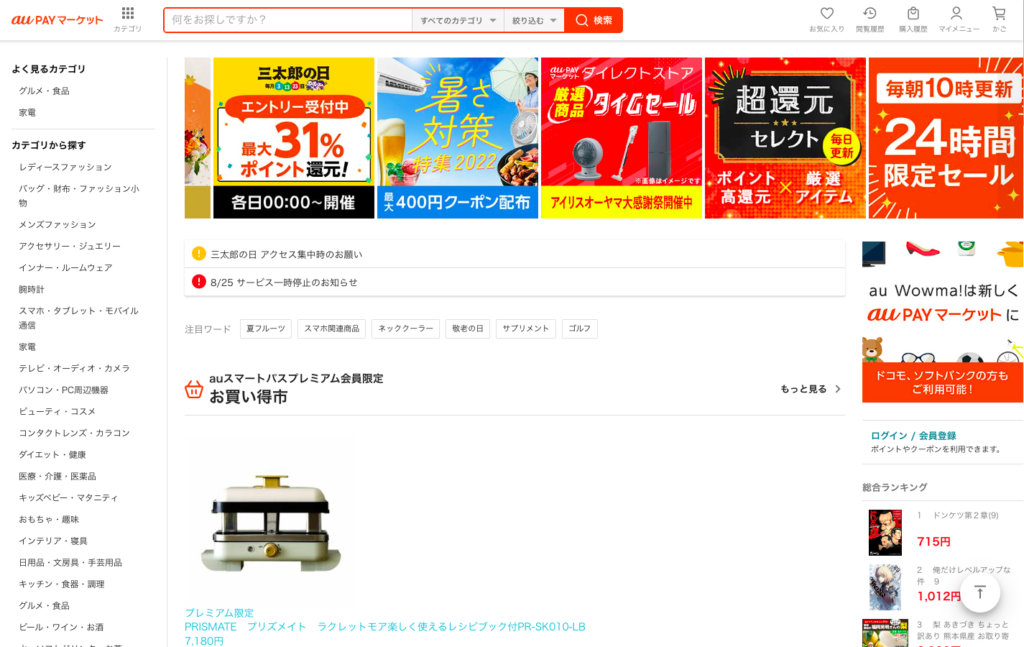 Note that the name has been changed to “au PAY Market” since May 2020, following the change of the name of au’s payment and EC service to “au PAY”. This EC mall is strong in fashion, home appliances, daily necessities, cosmetics, and gourmet foods.

What is the Global Market Size of Cross-Border EC Sites?

The demand for EC is growing all over the world, and the size of the market is expanding rapidly. By global standards, it can be said that Japan has not yet progressed to the point where it can be considered an EC country.

In particular, cross-border e-commerce, which sells products and services to customers outside of their own country through e-commerce channels, is booming these days.

The following table shows the scale of the cross-border EC market in Japan, the U.S., and China.

As seen from the data, the purchase amount from China increased by 7.9% from the previous year to 1,655.8 billion yen. Purchases from the United States increased 16.3% year-on-year to 2,094 billion yen.

Due to the high quality of Japanese products, the demand for inbound consumption has been high. If each company focuses on cross-border e-commerce in the future, there may be a chance to further expand sales.

We introduced the trends and rankings of the domestic and overseas EC markets. If you are an EC operator, we hope that EC operators will find this information useful.